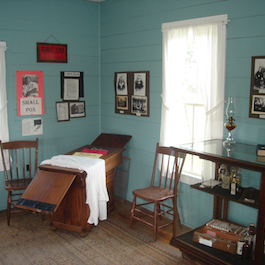 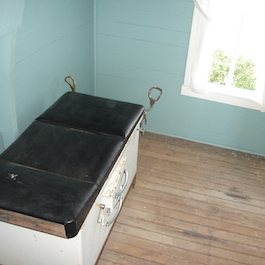 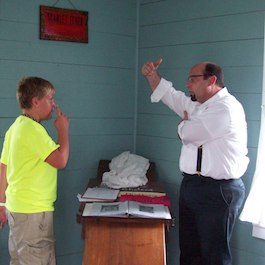 Abraham B. Sprunger, son of Münsterberg Canton of Bern, Switzerland’s Peter A. Sprunger, had a home near the intersection of US 27 and State Road 218. In this home was the office of Dr. John Neuenschwander. Young Peter watched with fascination as John cared for the health needs of the community. In 1886, Dr. John Neuenschwander and his family joined Rev. Peter S. Lehman's group to begin a new settlement in Hickory Co., Missouri.

On November 22, 1862, Peter married Katharina Amstutz of Berne and they became parents of Dinah, William and two infants who died. No doctor was available when their fourth child was born. The infant died, and was soon followed by Peter's young wife, Katharina, on August 24, 1869. Her tragic death prompted Peter to become a doctor himself.

On December 28, 1871, Peter remarried, this time to Katharina “Katie” Sprunger, daughter of Mennonite Preacher Christian and Marianna (Lehman) Sprunger. In 1996, the descendants of Peter and Katharina Sprunger totaled nearly five hundred and are scattered in many states and some foreign countries. Peter was a continuous member of the Indiana Medical Society, serving as a doctor at Berne from about 1872-1895.

The Swiss Heritage Society is grateful to Jerry A. Sprunger and Michael R. Evanston for the generous donation of Dr. Sprunger's Medical Office which was moved to the Village in December 1992 from its original location at 3893 south, 000 Road, Berne, Indiana by one of Peter's grandsons, Otis G. Sprunger. Otis used a cart he had made and his farm tractor to move the structure.